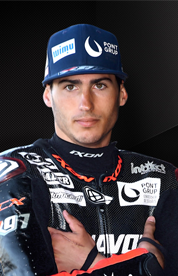 Xavi’s young racing career began in the national racing classes of Spain. Afterwards he joined the CEV Moto3 Junior World Championship for two years and then climbed up to the Moto2 European Championship. There, he secured six victories and three additional podiums in 2015 and finished the season as second.

In 2018, the journey begins with Dynavolt Intact GP
After another season with Tech 3, Xavi Vierge will be riding the Kalex of Dynavolt Intact GP from 2018 onwards. The team sees very high potential in the fast Spaniard and looks forward to a common future.