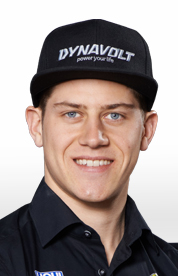 Place of birth :Landsberg am Lech

At the age of 2 years Marcel made his first acquaintance with the two-wheeled sport as a passenger in the Yamaha PW 50 side car of his big brother Benjamin. But he wanted to ride himself. This was when the adventure motorsport really went off! Marcel took part in his first race with 3.5 years old in the summer of 1996 on a motocross circuit. For his fourth birthday, “Celly” got a new KTM, with which he was competing at some smaller motocross races for a period of 1.5 years.

At the end of 1999, he switched to the road-racing scene and started in the Pocket-Bike class. After grabbing 5th position in his first season, he joined the DMSB Road Racing junior team, which he still belongs to today. In his second Pocket-Bike season he succeeded with 3rd place and in 2002 he finished his Pocket-Bike career with the German junior class title. This was followed by the move to the Mini-Bike class (GMR-KTM 65cc) in 2003. In this new category, Marcel finished the first year in 5th and a year later in 3rd.

The next step took place in 2005, when he competed in the ADAC Junior Cup on a 125cc Aprilia. The first season was very successful for the youngest rookie. He was third and won the first race in Hungary on the Pannoniaring. In 2006 he took pole in the first race, followed by two victories at Oschersleben and the Lausitzring. In the end, he missed only four points to the title.

In 2007, Marcel made his first season in the 125 IDM (International German Motorcycle Championship) and finished his rookie year in fifth position before he won the title for the next two years in 2008 and 2009.

In 2008, the German Youngster made his debut in the World Championship as a wildcard rider on the Sachsenring. In 2009, he started in three more races and impressed with a fantastic fifth place at the Valencia final. His first complete season in the World Championship was in 2010 for the Interwetten Honda 125 Team. In 2011, Schrötter switched to the newly founded Mahindra Racing Team, for which he had ridden almost a year and a half, first in the 125cc class and later in the Moto3 class.

Rapid move up to the Moto2 class, changing motorbikes and top 10 in the 2014 season
After he and the team went separate ways following his home race at the Sachsenring in 2012, Schrötter entered the Moto2 class in the middle of the year, where he competed for the Desguaces La Torre SAG team with a Bimota chassis. He stayed with the team also in 2013, but switched to a Kalex chassis. In 2014 the German changed to Tech3 and experienced his best Moto2 season so far, by finishing in 10th in the overall standings. He stayed in the French team in 2015, but ended the season only in 20th place. He moved to the AGR team in 2016, returned to a Kalex chassis and finished the season in 14th place.

For the 2017 season, Marcel Schrötter signed with the Dynavolt Intact GP team
From this season on Marcel belongs to the Moto2 team from Memmingen in Bavaria. Once again, he will switch the motorcycle brand and will fight for points aboard of a Suter chassis and alongside his German compatriot Sandro Cortese. His focus is on constant top-10 results and on setting as many highlights as possible.